Dysfunctional Italy is a series detailing the often preventable troubles one finds living in Italy, from the small to the big. This article is about payment machines in general, including ATM.

While short-term visitors may not notice, long-term expats from countries like the U. S., Canada, or the U. K who live in Italy often find the little every day things they take for grant back home simply don’t work reliably or consistently. For those who are used to relying on using electronic card payment such as a credit or ATM (bancomat) card, it is important to be aware that Italy is still mostly a cash economy and despite its status of one of the top international tourist destinations, card payment or any type of payment using a machine is not consistently available or reliable. This is not limited to just accepting card payment. Machines accepting payment in cash are also often not functional. Bank terminals often are out of service, or a particular feature such as international cash withdraw would fail when you one needs it.

In this photo, Banca San Paolo Intesa’s ATM (Automated Teller Machine) was out of order. This was in the center of Turin, one of the biggest cities in Italy. This happened often quite in my several years of stay in Turin. There are times I have to make two to three visits to different ATM just to get money.

If you plan to drive in Italy, make sure that you always have cash to pay for the fuel. Generally, you should be able to pay with a credit or debit (ATM) card when the operators are working. One problem in particular concerning people who use an U. S. credit card is that until recently, most credit cards issued by U. S. banks don’t have a smart chip. That means the card has to be used with a magnetic reader and cannot be used in many automated payment machines which will ask for a PIN. This in itself is generally not a problem when an employee can slide your card. However, most gas stations in Italy are closed after 8PM, which means you will have very limited chance to pay at the pump with your cards. Some of the pumps accept just ATM cards; most will not accept credit cards. However, some simply do not accept either. 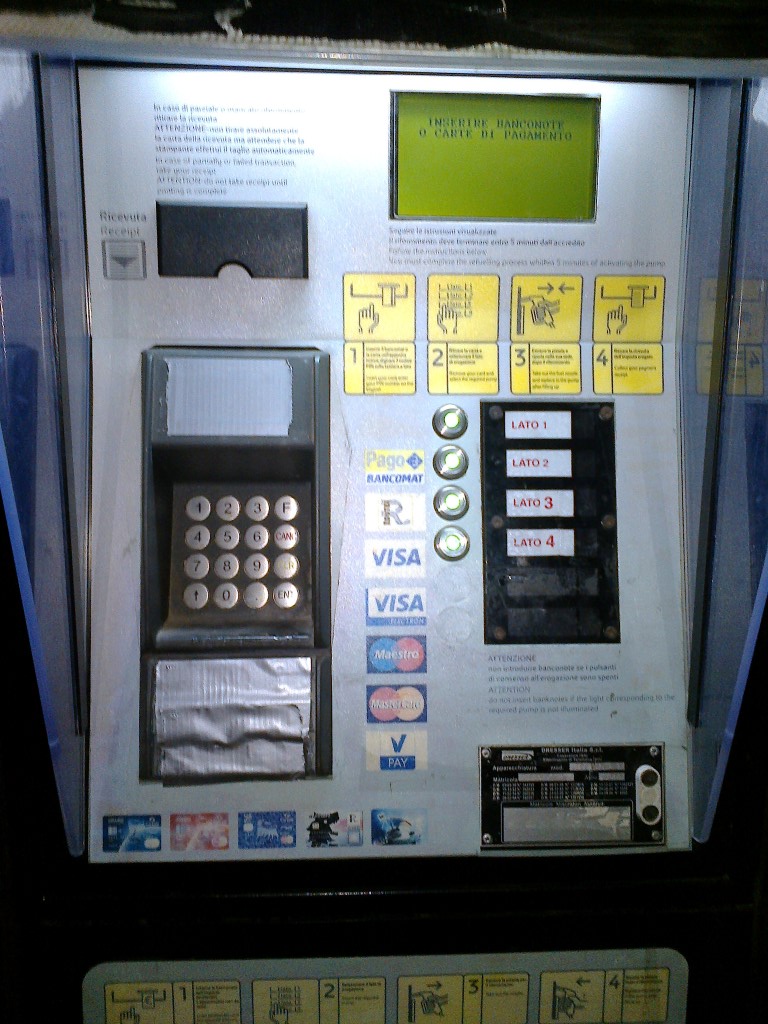 In this photo, the gas station sends a clear message that they do not accept card payment by duct-taping the slot even though the LCD screen shows “Insert bank note or card of payment”.

Sometimes, the failure of a payment machine could cause a big problem such as traffic built-up. At this auto toll booth, many cars were lined up and trying to get out to the other lanes because the machine of the card-payment-only lane malfunctioned. I was there and it took at least twenty minutes to get through to another lane.

With this much chaos, one can at least enjoy the sunset (on Autostrada A1, pedaggio Caserta Sud)

Now, even if you have cash, often the machine will fail when you need it the most. Public transportation requires you to get a ticket before you get on, as the conductor generally does not sell the ticket onboard. In unmanned vehicles such as the Turin metro, you must buy a ticket to get in. This ticket is usually sold by the tobacco shop, newsstand or the machine located inside the metro station. Unfortunately, most places in Italy close for lunch between 1PM to 4PM, so if you need to get a ticket your only choice is the machine. If the machine doesn’t work, what do you do?

This metro line is Turin is operator-less, yet the vending machine cannot be trusted to sell tickets

I spent years both in the heart of northern and southern Italy, and I had my shares of problems like these. Many Italians living in northern Italy like to feel smug about their "superior" state of living and mentality to the southerners; Some may be justified, however, for the most part, their haughtiness is often misplaced as Italy as a whole share mostly the same problems, and often to very similar frequency all over the country. These problems happen both north and south, and the problem is rooted in the mismanagement of machine maintanence, poorly designed quality of service protocols, incompetent technical workers both in the frontline and back office; and occassionally, bad luck as any machines could fail. However, the frequency of technical failure is something alarming and the fact it happens across businesses, sectors, cities, regions, means the culture of quality of service has a systemic problem in Italy.